Tips and instructions on getting started using the document preparation system LaTeX.

Please review the following list of problems commonly encountered in LaTeX-formatted theses and dissertations.  If you need help, please contact Rob Sippel at rsippel@fit.edu or 321-674-7585.

I don't know anything about writing a thesis or dissertation using LaTeX.

If you are completely new to LaTeX--or even if you have some previous experience--we strongly encourage you to use the Thesis Template for use with LaTeX, which is available on the library's website.  This template is already formatted to meet the general requirements for Florida Tech theses and dissertations.  Although some university departments may have specific requirements that are not reflected in the template, any required modifications to the template should be relatively minor.

To locate the template:

I need to convert my thesis or dissertation to PDF-A.

The Thesis Template for use with LaTeX is already configured to generate your document in the form of a PDF-A file. However, if you find that you are generating a conventional PDF file rather than a PDF-A file, you may take the following measures:

One of my chapters does not appear when I compile the document.

Within the main.tex file, you should find a series of commands similar to the following:

These are the means by which chapters become incorporated within your document.  Make sure that you provide an analogous command corresponding to your missing chapter.

The word "caption" appears on the cover page.

This error results from LaTeX' sensitivity to the order in which packages are loaded in the main.tex file.  This may be corrected using the following procedure: 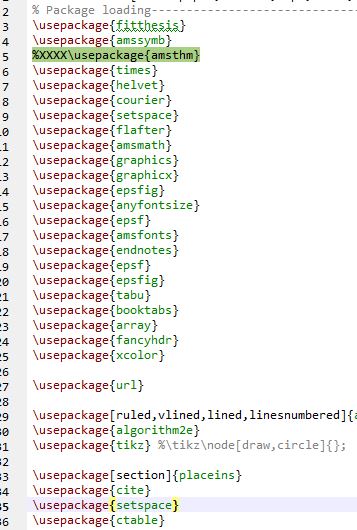 The following StackExchange submittal may also be of interest: https://tex.stackexchange.com/questions/316139/lost-word-in-first-page

I want to increase the number of signatories on my signature page.

To make the necessary modifications, it is necessary to edit two files: 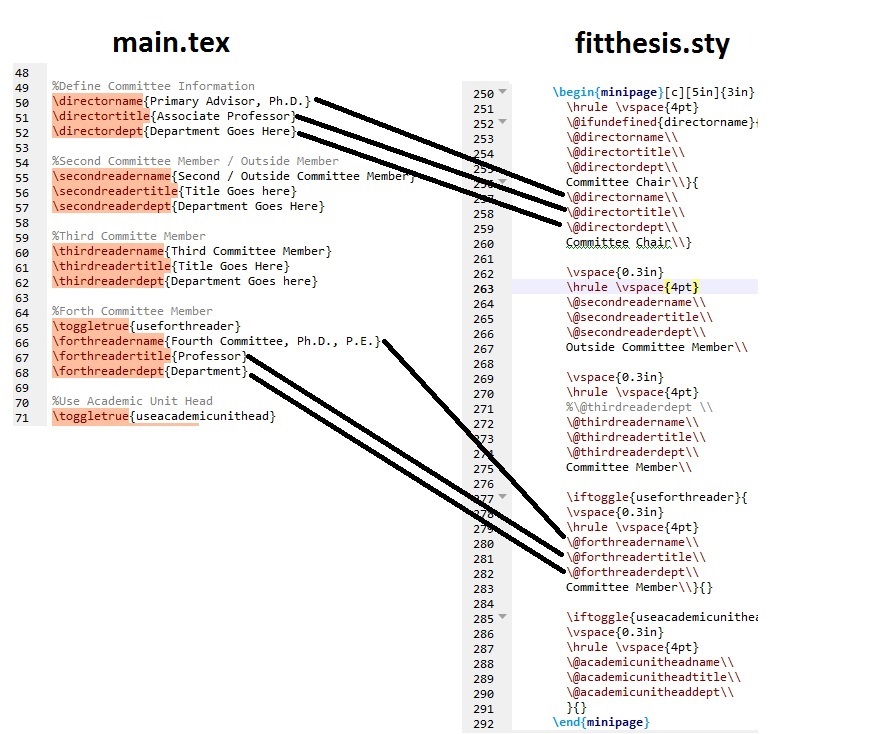 As seen in Figure 1, the main.tex file contains a series of blocks of commands, corresponding to each of the signatories on the signature page.

The right side of Figure 1 shows corresponding blocks of commands in fitthesis.sty that are used to generate each of the signature lines

Remaining in fitthesis.sty, look for the two sections resembling the following:

LaTeX allows the user to code "switches" into their document that can be used to easily reveal or conceal blocks of text.  Examples of this may be seen in the section of fitthesis.sty shown on the right side of Figure 1, where some blocks of code begin with "\iftoggle{...}, followed by the remainder of the block contained in curly parentheses ("{ }").  Corresponding blocks of code in main.tex, shown on the left side of Figure 1, begin with "\toggletrue{....}", indicating that the associated text will be visible in the document.  To conceal the text, the user should change "\toggletrue" to "\togglefalse" in the code.  Variables used in these commands (e.g. "useforthreader" or "useacademicunithead") in the examples in Figure 1) must be declared in the fitthesis.sty file using '\def\..." and "\newtoggle{....}" commands seen on the left and right sides, respectively, of Figure 2.

As shown on the left side of the figure below, the code used to generate the signature page in fitthesis.sty begins with the following comment statement:

The code shown on the left is typical of that used to generate the default configuration of the signature page, in which of the signatories are listed in a single column.

To create a signature page in which the signatories are divided between two columns, the uppermost lines of code (through "\@author") can remain unchanged.  However, the section of code outlined in red will need to be modified.  The code on the right side of the figure provides an example of how the code outlined on the left side may be modified to split the signatories between two columns.

To achieve this, a table is created with 3 columns.  The columns serve the following purposes:

Between the "begin{tabular}" and "end{tabular}" commands, each line of code generates a line of the table, encompassing all three columns.  The contents of the respective columns are separated by ampersands ("&") in these commands.  Vertical space is introduced between the signatories by the "\\ \\ \\" command, which generates 3 line returns. 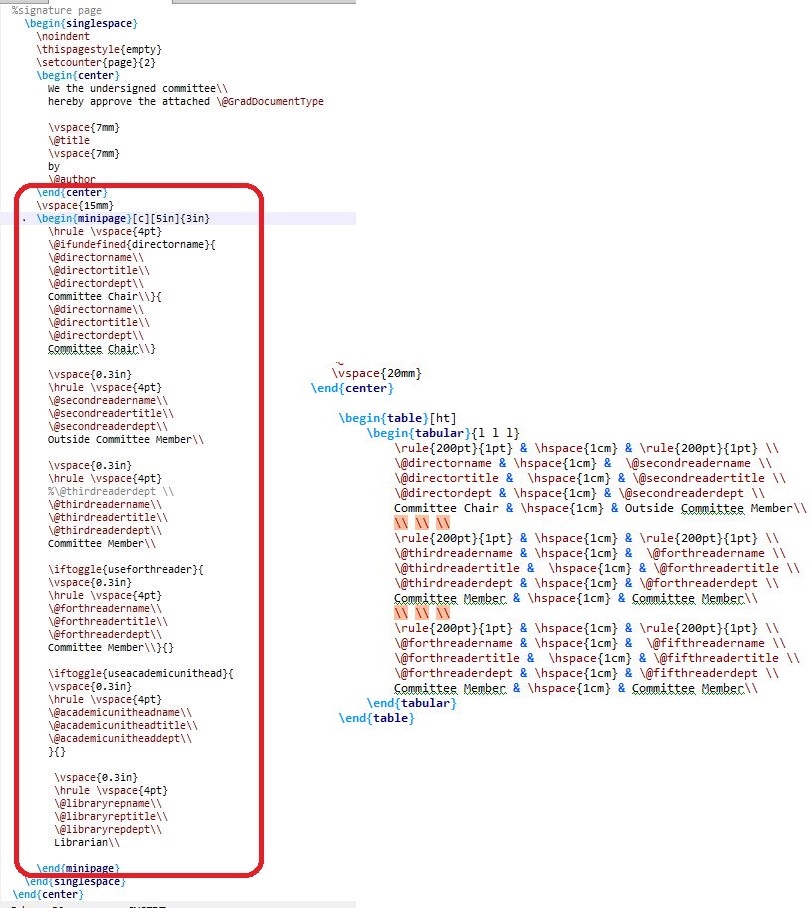 I grouped my signatories into two columns and now my margins are too small.

In the course of grouping your signatories into two columns, your left and right margins will be reduced.  In the event that they have become too small, begin by opening the fitthesis.sty file in your LaTeX editor.  Find the section in which the signature page is defined; in the original thesis template, this begins with the command "%signature page", as shown in the figure below: 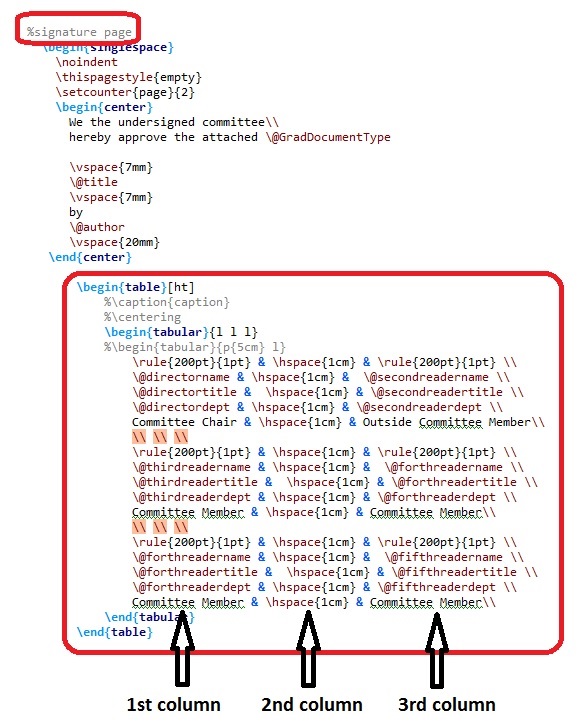 If you grouped your signatories using the method outlined previously on this page (see the box entitled "I want to have my signatories in two columns on my signature page", above), your fitthesis.sty file will contain a table with 3 columns.  For each line of the table, the contents of the respective columns will be separated by ampersands ("&").  The contents of each of the 3 columns are as follows:

To increase the size of the left and right margins, you need to decrease the width of the columns.  Some ways of achieving this include the following: 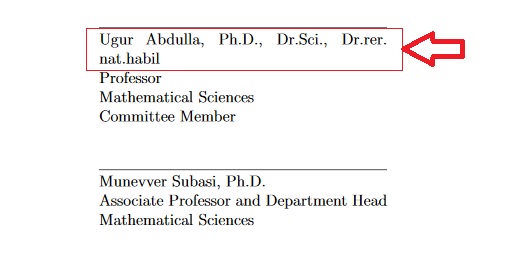 To address the situation shown above, take the following measures: 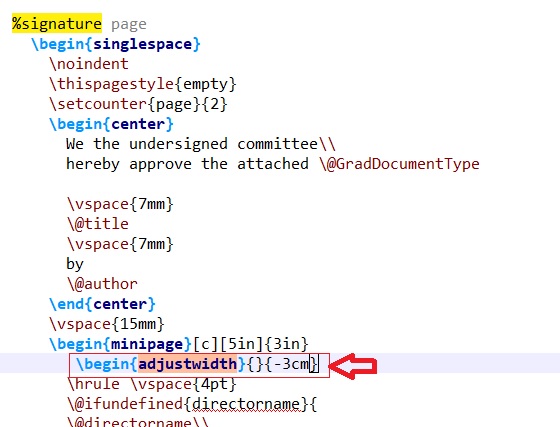 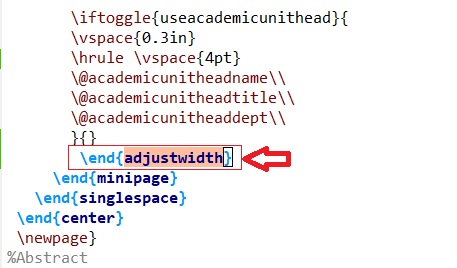 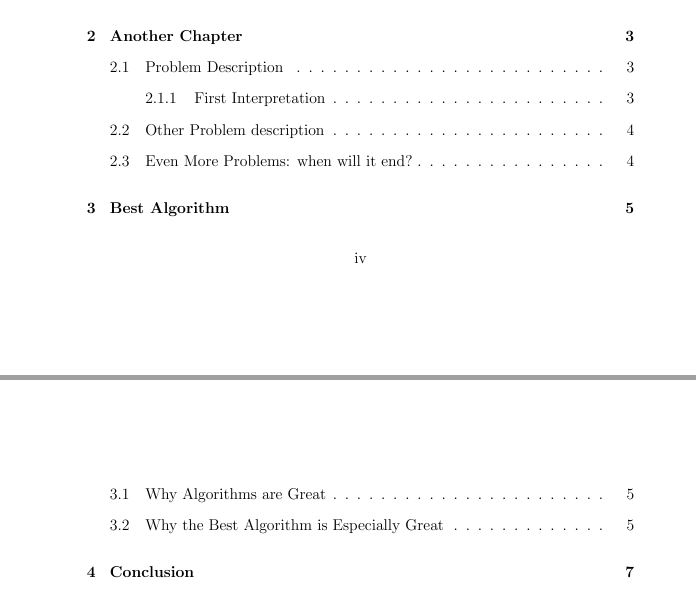 To correct this problem:

In your editor, open the file containing the chapter (for this example, chapter3.tex).

On the first line of the file, add the following:

Save the file and recompile your document.  Your formatting issue should be resolved, as shown below in Figure 2. 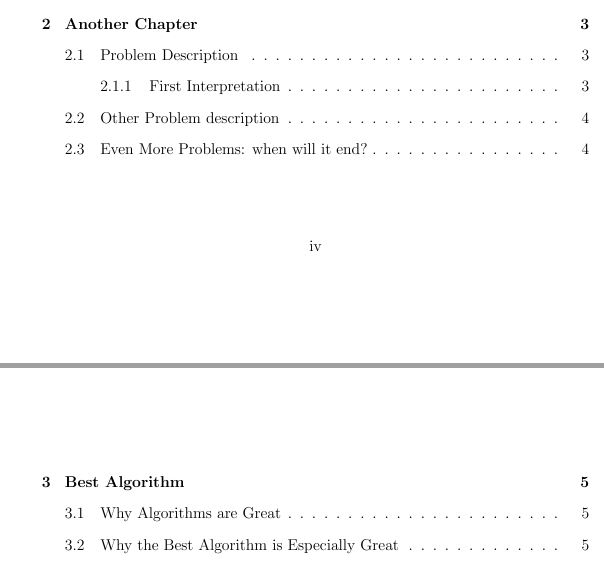 The entries in my Table of Contents do not link to the corresponding section headings.

If the entries in your Table of Contents do not link to their corresponding section headings, try the following: 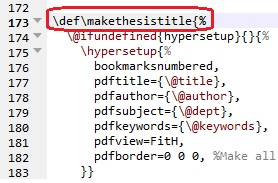 If you wish to adjust the amount of space between your figure names and their page numbers in the List of Figures (see figure above), the following measures should suffice:

I need to include pages with a landscape orientation

To add pages with a landscape orientation within your thesis or dissertation, begin by activating the lscape package within the main.tex file, as follows:

The lscape package will enable you to specify locations in the text of your document where you wish to start and stop landscape formatting.

To reposition and rotate the page number on the landscape-formatted pages, you will need to define a function in the fitthesis.sty file:

Now, within the text in which you wish to shift to landscape formatting: 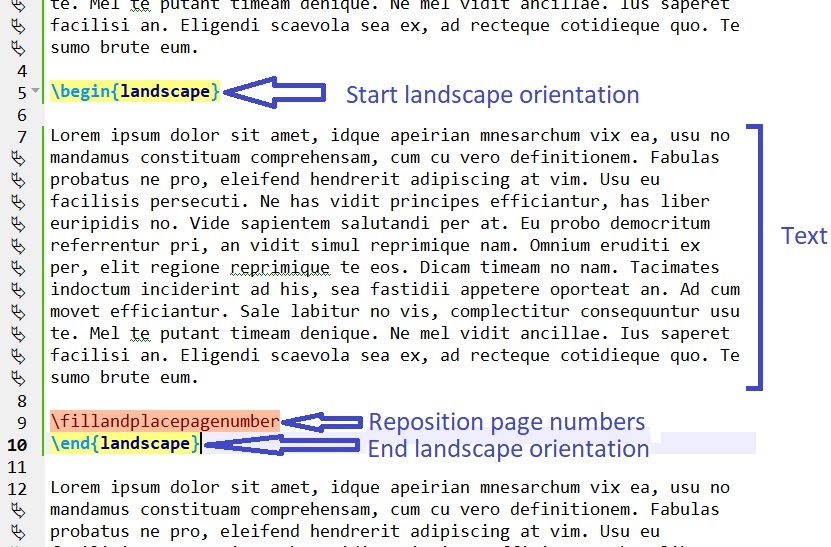 Note that the function defined to reformat the page numbers does not need to be named "fillandplacepagenumber"; you may choose a name of your own. 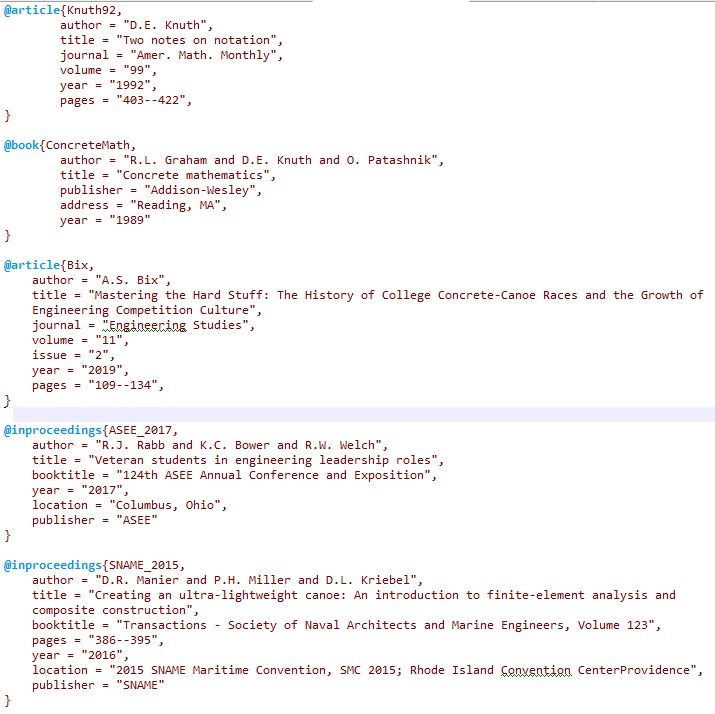 However, in the References section of your thesis/dissertation, it is unlikely that your sources will appear in the same order as they are listed above.  Instead, LaTeX will list the sources alphabetically by the last names of the primary authors (underlined below). 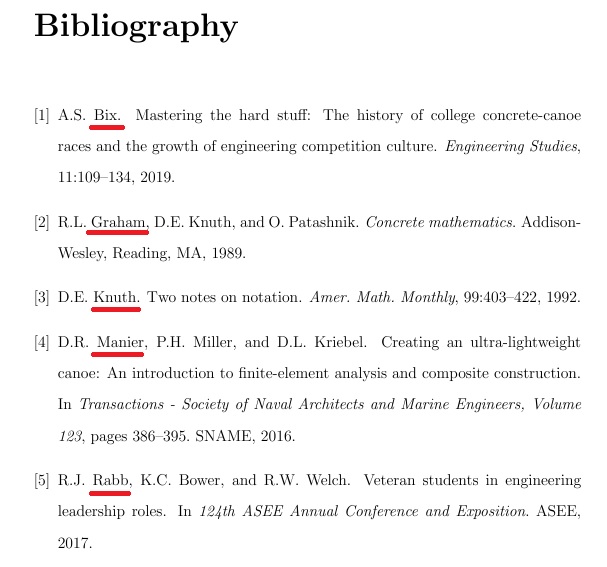 Some of the entries in my Bibliography are being split between pages.

To address this problem, introduce the following code into your "main.tex" file: